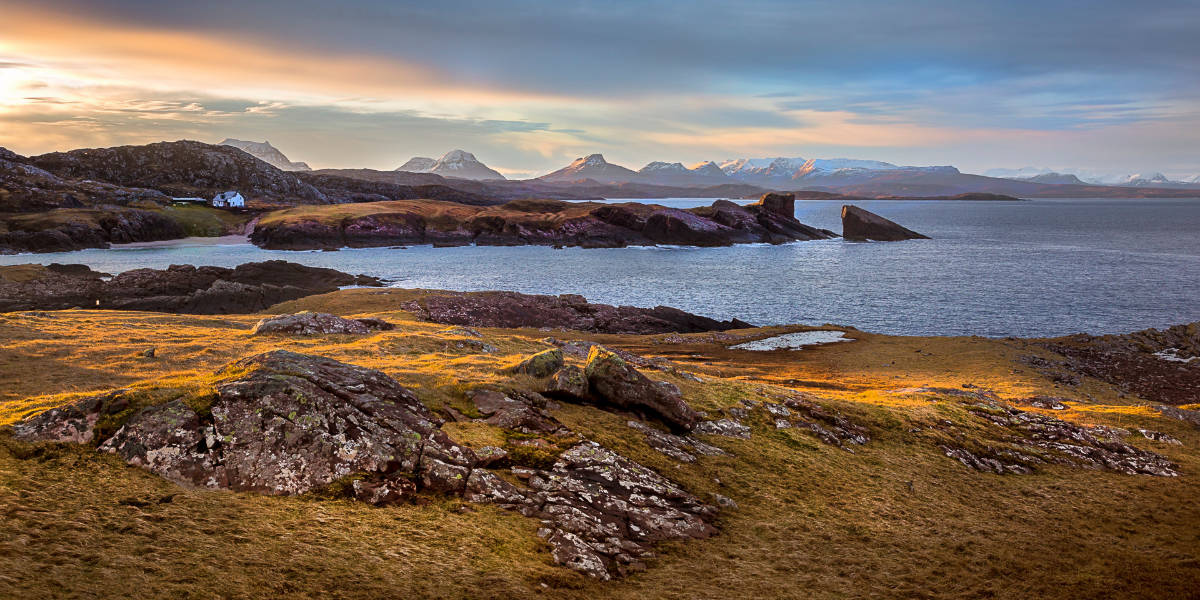 At 75-years old, William 'Bill' Smith shows no signs of slowing down. The former teacher and owner of Clachtoll Cottage works as a Glenshee Ski Patroller, a Polar Guide for Oceanwide Expeditions, and a BASP First Aid Trainer. Here’s his story.

Bill worked in teaching for 45 years, starting his career in 1964. As Head of Art and Design at Ellon College in Aberdeenshire, he was more than your average teacher.

“My job was not to train people to be artists, that was an incidental part of my job”, says Bill. “My job was to get people to look, who do not look. Because not everyone looks. But at the same time, there's a difference between looking and seeing, so my job was to get people to look and see. And not just to look and see, but engage their brain, to think, and to do. I would describe my role really, as someone that was using art and outdoor pursuits as a means of educating people.”

In 1972, Bill started running the Ellon Academy Adventure Camps, taking students across to Lochinver and introducing them to adventure. Bill ran the camps for 36 years.

“The largest of these camps were huge,” says Bill. “About nine Ford transits in convoy, all pulling trailers, running up from the far side of Scotland across to here. We’d set up a camp at Clachtoll Bay north of Lochinver. I’d bring up canoes and boats. This was a major educational thing for pupils, introducing them to their physical heritage, and also introducing them to aspects of history in this location.”

A second life in Lochinver

Trips to the far North West became a regular occurrence for Bill, not just with the school but outside of work too. “I immediately fell in love with the area, because it’s so wild and remote, that I returned with the family over and over again. My wife and I and our two children, we used to spend long, long periods of time, in the summer holidays and weekends, camping in little tents.”

After years of camping, Bill bought a caravan which they used to park up at Clachtoll and use as their base. “One day, I decided to look around for a ruin to do up”, he recalls. “But being an artist at heart, it was all about location. So eventually, I managed to buy a little bit of land on the north side of the bay. Then I started working, putting a road into it, a track into it. Then I started to collect stones, thousands of stones, and built walls all the way round it. I landscaped the land, flattened it out. I spent years doing that, and then eventually put up a house, in the most superb location, right on the edge of the sea, about 35 metres from the high watermark.”

The house, Clachtoll Cottage, sits on an isolated plot of land on the northside of Clachtoll Bay. When Bill is away on his polar expeditions, or at his other home in Ellon, he rents it out as a source of income. Guests have described the cottage as a ‘tonic for the soul’, ‘a truly exquisite piece of isolation’ and ‘one of the most beautiful places in the world’.

If you’re lucky enough to stay while Bill is around, you may be treated to a trip out on one of several boats he keeps at the property. “I’ve got several boats that I keep here, two fast RIBs, a little fishing boat, a little sailing boat, and some powerboats. Just lots of toys, windsurfers, kayaks, all sorts of things.”

Bill says, “I wouldn’t have spent all those years teaching if I didn’t have this other life coming to Clachtoll every weekend.” In fact, Bill’s life echoes that of the Norman MacCaig poem, ‘Two Men at Once’.

“My life is a strange life", says Bill. "I exist in several compartments that are quite separate from one another. And I find I’m stimulated by that. I have an Ellon life, where I was the principal teacher of art, involved in other pursuits and am extremely well known in the community. I drive away from Ellon and come across here. And none of that comes with me. I have a strict rule that I don’t do any art here. Here is for playing with boats, cutting grass, digging banks, walking up hills and doing stuff like that. It's a separate compartment, and because it's a separate compartment it's totally refreshing.”

From Art teacher to Polar Guide

During his career in teaching, Bill’s love for the outdoors and education also led him to a take on a number of other roles. He needed the adrenaline release of the frustration that comes from being stuck in a school or at a desk. “I was heavily involved in other pursuits”, he says. “And because I was in education… I was a skier, so I became a ski instructor. I was a sailor, so I became a sailing instructor. I had two powerboats, so I became a powerboat instructor.”

After forty-five years in teaching, Bill retired from Ellon Academy in 2009. But ‘retirement’ wasn’t on the cards - “I’m either playing or I’m working. There’s no in-between bit, I can’t stand inactivity, it’s like a disease.”

It was then that an opportunity opened up that led Bill to become a Polar Guide. And eventually, of course, a Polar Guide Trainer. Of his experiences in the Arctic and Antarctica, Bill says;

“When I’m in the Arctic, I wear a pistol and carry a rifle all day. I’m guarding people against polar bear attacks. The whole idea is we’re taking people to see whales, walrus and polar bears, and get as close to them as we possibly can, in the ice, in these landscapes. Then in Antarctica, the scale changes. In the southern Falklands, South Georgia and the Antarctic peninsula, there are huge numbers of penguins. Coming into South Georgia, St. Andrew's Bay, or Salisbury Plain, you're looking for a place to land, and it's extremely difficult. It's a huge flat beach, miles long, yet you can't see a place to land safely. Because on the beach there are 100,000 fur seals and elephant seals. It’s a colossal mass of seals all along the beach.”

Bill acknowledges that his life is far from ordinary. “I’m a 75-year-old, who works in Antarctica, in the Arctic, and in Greenland, and who works full-time as a Ski Patroller during the winter. Which is rather odd - an artist doing all these things!” He credits his wife Kathryn for facilitating his life of adventure and activity. “She knew I had to be continuously engaged, continuously busy. None of it would have been possible without her endless encouragement and support.”

Lochinver, of course, has also had much to do with shaping the man Bill is today. “I am the way I am as a result of what this landscape has given me. I pretend to be cool, but really I’m a romantic in that sense.”

I managed to buy a little bit of land on the north side of the bay. Then I started working, putting a road into it, a track into it. Then I started to collect stones, thousands of stones, and built walls all the way round it. I landscaped the land, flattened it out. I spent years doing that, and then eventually put up a house, in the most superb location, right on the edge of the sea, about 35 metres from the high watermark.
William 'Bill' Smith