Who ate all the pies? 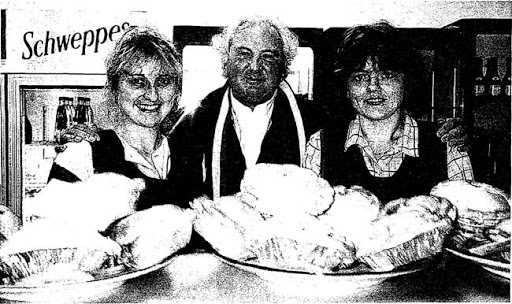 The next day we went on a tour of the Highlands. Majestic scenery, no real towns. Laurence's wife, Brigitte, had been there before. She took us to Lochinver's Larder in Lochinver. It looked dreadful from the outside. Frozen ﬁsh fingers if we're lucky, I thought. I checked another place a few doors away, but that looked even worse. I entered with a heavy heart. The first room bad a counter on the right. It was full of pies. My spirits rose. "Do you make those here?" I asked. "Yes," said a nice girl. "When were they baked?" Most of them were made that morning, a few the day before. There were 16 different pies! From leek and mushroom to venison and cranberry to chicken curry. Above were rows of home-made Cakes that looked amazing. But awful cakes can look as amazing as good ones. I had a steak and ale pie and a chicken, cheese and potato one. Both absolutely tiptop. We ate in a large room overlooking the loch, an old church, wonderful scenery. Then I chose a chocolate fudge cake and a vanilla fudge cake. Totally, absolutely, incredibly historic. Touch of moisture, delicious icing, perfect. My only regret was that I couldn't go through the lemon cake, pineapple fruit tart, shortbread tarts, carrot cake, rhubarb and strawberry pie, banoffi pie - which is a creamy thing with banana - and the homemade cherry cheesecake, to name but a few. "Who's going to eat all this?" I asked the owner, Ian Stewart. "Local people." he said. "Tourists." "But there's only us and two other people in the place," I said. Ian did not look worried. I'd liked to have helped him by eating everything. I'd done pretty well having two main courses, two desserts, a chocolate milkshake and coffee. That's what the Highland economy needs. Me. Every day.

We welcome your input, ideas and any feedback. Good or bad!