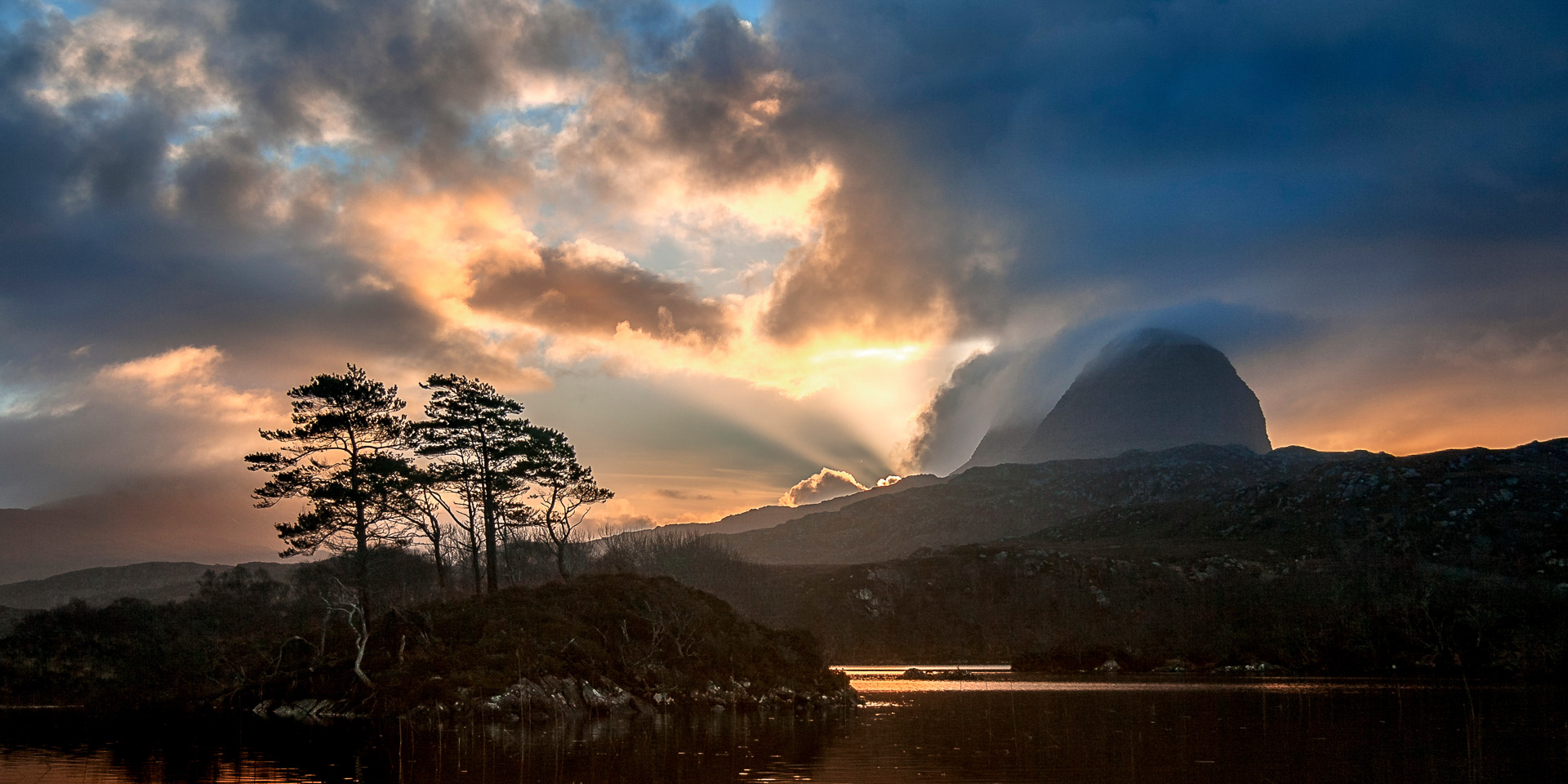 John McCarthy is a photographer and owner of art gallery Lochinver Landscapes. Born and raised in Glasgow, John spent 25 years living and working in England before moving to Lochinver with his wife Jeanette in 2010.

John originally qualified as an interior designer, before embarking on a successful career in retail design and contracts management. He spent time living and working in London and Leeds before moving to Leicester and eventually setting up his own design and contracts company, designing and installing interiors for high street retailers and catering companies.

Whilst living in England, John and Jeanette would regularly return to the Scottish Highlands. “You hear people say 'Nobody in Scotland really appreciates Scotland until they leave.' And it’s true”, says John.

Although John grew up in Glasgow, for much of his life he’d never been further north than Balloch, which is just twenty minutes away. He recalls the first time he drove north from his parents home in Barrhead. “We went through Glencoe and it blew us away. Then going further north up the Great Glen, past Loch Ness and Inverness. It just gets into your soul.”

On his trips to the Highlands, John would take photographs of the landscape to show his friends down south how beautiful Scotland is. “Everyone would go to Spain or Ibiza or wherever it was they were going and say, ‘How come you’re going to Scotland?’ The photography was my way of saying, ‘Well, that’s why. Because it’s stunning!’”

John had always been interested in photography but this is when he really started to get into it. “My photography has always been part of my life anyway. It was part of my college course and I've always done it for work, but mainly interiors and commercial photography. So the landscape thing just seemed to keep taking off. Eventually, it got to the point people were saying, ‘You really need to do something with this.’”

The road to Lochinver

Achiltibuie, on the Coigath coast, became like a second home to John and Jeanette. They would visit for two-weeks three times a year, and the rest of the time was spent looking forward to the next trip. They dreamed of moving up permanently, but for various reasons, either the timing wasn’t right or things would fall through, it just never happened.

For John’s 40th birthday, Jeannette decided they should go somewhere different. And so they ended up venturing even further north, to Lochinver.

“The day we got there was an absolute stinker of a day. One of those days with low cloud where you just couldn’t see a thing”, John recalls. “We got to this little cottage in the middle of nowhere. I’m thinking, ‘We’re going to be here for two weeks? It will be hideous.’ We were so tired from the drive we didn’t do anything that night. But, when I got up the next morning it was glorious. All the hills, Stac Pollaidh, Suilven… everything was there. It was a glorious day and it was stunning. It blew me away! We went for lots of walks, went to the beaches, around the Summer Isles. Everywhere we looked, it was absolutely awe-inspiring.”

Within a week, any dreams they’d had of moving to Achiltibuie had completely changed. “It grabbed us that much that we both realised, this is it!”

In 2008, things started to fall into place. John was in Lochinver visiting a friend and noticed the fishmongers was vacant and had just been bought by the butchers. He went in and asked if they were doing anything with the shop next door, and discovered it was available. He agreed to take it on and they shook hands on it there and then. “On my way back to Leicester, I phoned my accountant and took the money out of my pension fund. We bought it that day”, John recalls.

The timing was perfect. “I thought if I don’t do it now, I’m never going to do it. I was seriously unhappy with what I was doing down south and couldn’t see myself doing it for the rest of my life. We sold up everything and just took the risk. So far, so good!”

John rented out the gallery to fellow local artist Mary King until they were ready to move up, and the ‘Picture Shack’ was highly successful. After selling John’s business and their home in Leicester, John and Jeanette moved up in 2010 and took over the gallery in 2011, renaming it Lochinver Landscapes.

As well as John’s stunning photographs of Lochinver, the Assynt mountains and the surrounding areas, the gallery features a wide variety of artwork by both local and nationally renowned artists. It includes original paintings in pastels, watercolours and acrylics, as well as etchings, drawings and photography.

“It's a small space, it's not a huge, big gallery, but I've got it well packed”, says John. “I like to keep turning it over and putting in new stuff and moving it around a bit. We get a lot of regulars coming up year after year, and maybe a lot of them just come in for a chat, but it's nice for them to come in and see different things.”

In their spare time, John and Jeanette can be found walking in the mountains with their two border collies. “We’re out with the dogs a lot of the time. I’ll always have my camera with me. My hobby is my work as well.” They enjoy the close-knit community that comes with living in Lochinver. “You get to know people very quickly”, says John. “When I was setting up the gallery, it was amazing the amount of help we were given. Even if it was just people wishing me well and wishing us all the best.”

Of Lochinver Larder, John says, “There was always a good crowd in there. It’s a great place to meet tourists as well. It’s great fun. Everybody’s looking forward to see what John’s going to be doing with it because it’s such a hub for the village.” 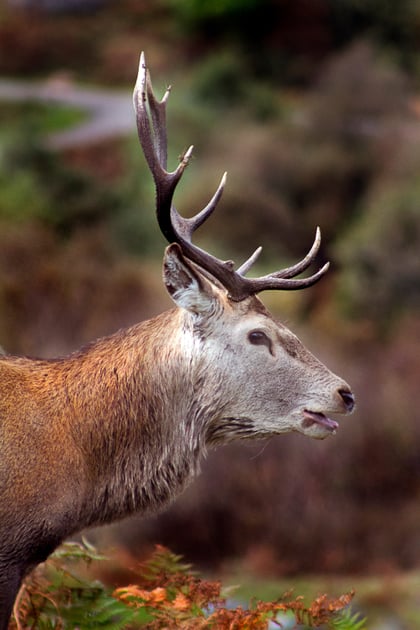 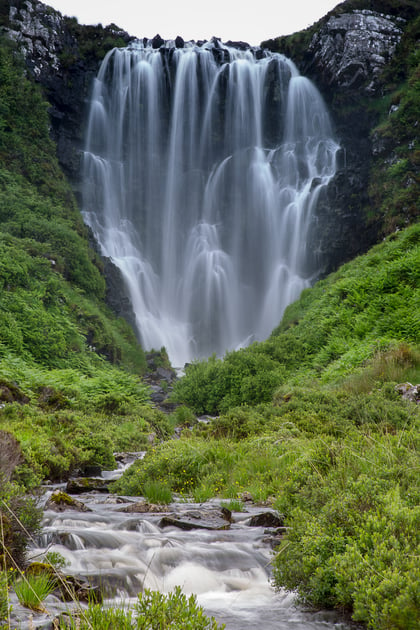 I love art, I love painting. I like sketching the mountains, painting the mountains as well. To a certain extent, I don’t know if I’d really class myself as a photographer. I think of myself as a landscape artist. Photography just happens to be the main tool I use.
John McCarthy