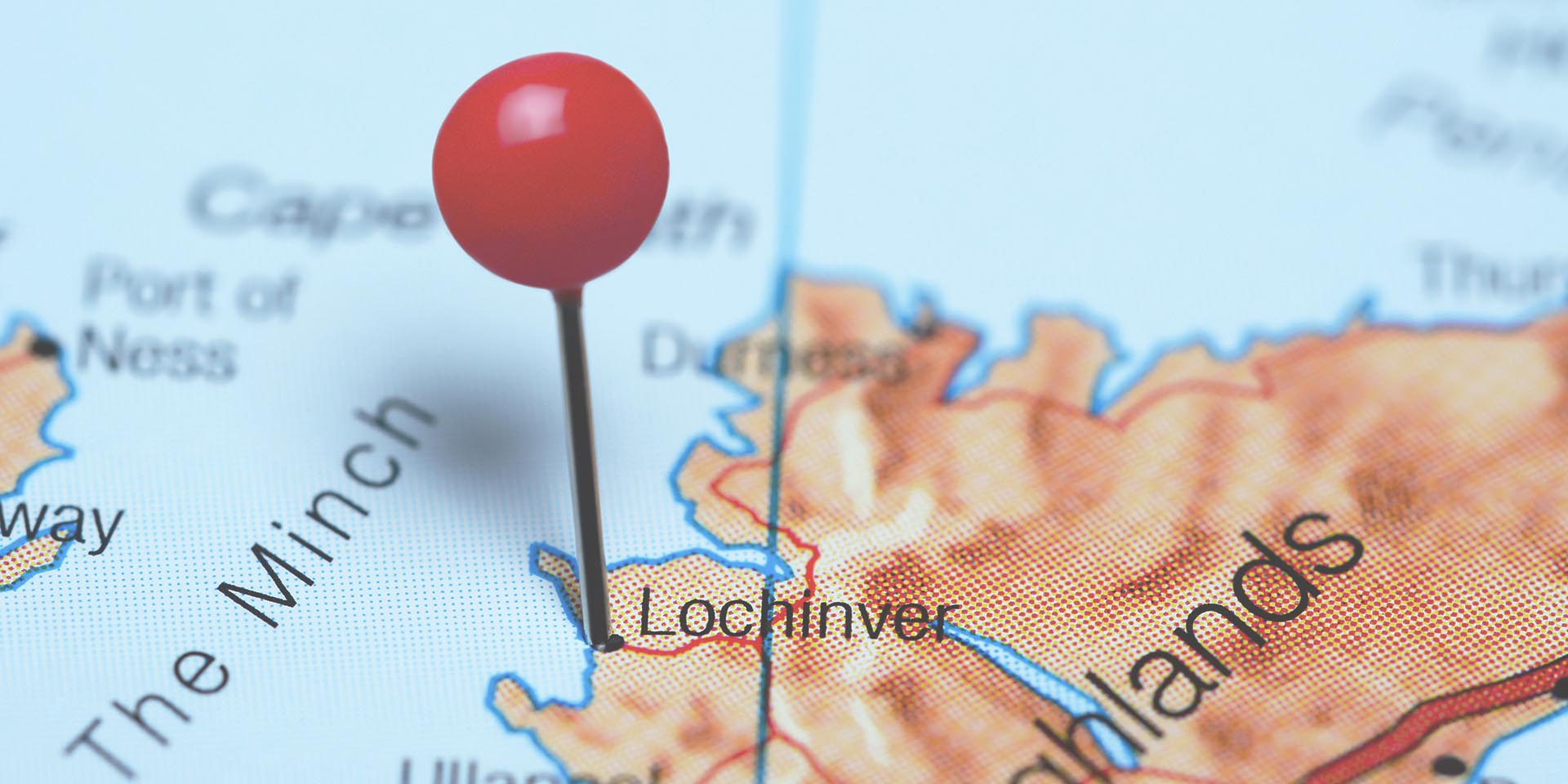 Over the last thirty years, Ian and Debra Stewart have nurtured Lochinver Larder into a successful business with a reputation for having ‘the best pies in the land’. It has gained a loyal following amongst locals and visitors alike who come to enjoy the famous pies, homemade recipes and warm hospitality. Here, we share Ian and Debra’s story.

Though born and raised in London, Ian Stewart has always had a strong connection to Lochinver, as his mother was born in the village. As a child, Ian would come to Lochinver every summer to visit relatives, and has fond memories of sleeping in wooden chicken huts on his great uncle’s croft.

That croft was left to his mother when his great uncle passed away, and Ian’s parents retired early and moved up to Lochinver. Ian and Debra - then his girlfriend - would visit regularly.

“All there was to eat back then was fish and chips from the village cafe”, Ian recalls. “There was a hotel, now the Culag hotel, but it was quite upmarket so we never really went in. Then there was a bar called The Wheelhouse Bar, which was really a fisherman’s bar. So there was nothing really here.”

When Ian and Debra decided to start a family, they too made the move to Lochinver. By now, Ian’s job as a steel trader had seen the couple living in both the West Indies - where they were married - and Pakistan. On returning to London, Ian continued to travel for work. But they wanted to settle somewhere they could raise their children in nature, and where Ian would be around to watch them grow up.

Despite having no prior experience in catering or hospitality, Ian says, “At the time there were lots of grants available to develop business in the area. So we thought, ‘Why not? Let’s have a go at food.’ And we bought this place, a complete wreck of a cottage, and we expanded it.”

The business started out as a deli offering takeaway sandwiches. Ian and Debra started with cheeses and meats with baguettes and croissants from France. When their first child was born, they changed the downstairs bedroom into a B&B room because it had a separate door. They would offer a continental breakfast that guests could enjoy while sitting in the small bay window of the room. Ian talks fondly of how their young son would sit in a laundry basket in the kitchen, watching them while they worked.

After a few years, it became harder to get hold of the French baguettes and croissants so they started to bake their own and try out new recipes. “We started doing big 12-inch pies and cut them into wedges”, says Ian. “We also used to do a huge stew type meal to take away, as well as freshly baked sandwiches and cakes.”

In 1991, Ian and Debra built an extension with a lounge and dining room at the back of the property. It was then that they started doing dinners, which quickly became very successful. “We’d open during the day and people could sit in for teas and coffees, and grab a pie, stew or a cake. Then in the evening we would serve steak and fish”, says Ian.

The evening menu was inspired by the dinner parties they used to hold with the expat community while living abroad. “A lot of the meals were quite saucy”, Ian explains, “so we could vacuum pack the leftover sauce to reduce our waste. We would do the same with the stews too.”

When Ian and Debra discovered 4-inch pie foils in their local Cash & Carry, they started making individual pies - and the sauces and stews made for perfect fillings. “We developed lots of different pies. Some sold really well, some we carried on, and each year we brought out something new. People used to come in on a Saturday and buy half a dozen of one and half a dozen of another.”

The pies quickly gained a loyal following and they would find many people returned year after year during their trips to the North West Highlands. “We could set our season by the faces that arrived here year on year”, says Ian.

The “Pies by Post” side of the business was born about ten years ago. “We discovered that you could freeze the pies”, says Ian. “We don’t freeze them to post, but they freeze beautifully. So we got some polystyrene boxes and tested it all out. And away it went! It went crazy from there.”

Pies by Post became something to keep the staff busy during the quieter winter months. Ian recalls, “It would go mad in the weeks leading up to Christmas, you’d think there’d be a famine coming!”

Many of the staff over the years were the local kids in the area, including the couple’s two children, Sean and Natalie. “We’d have kids washing the dishes for a year, two years, and then they’d go away to university and come back to us during the summer months”, Ian explains. “Now we’ve had some of their kids and their kids’ kids come and work for us.”

Though Ian confesses to still being a city boy at heart, he believes Lochinver is a great place to raise a family. “It’s been a fantastic place to raise our children”, he says. “They’ve had a fabulous education, lived in clean air, and enjoyed the outdoors in the summers.”

The children attended the primary school in Lochinver. Ian says of the school, “You’d travel the country and the world to find a nicer located primary school, sitting on a jetty out into the loch. It’s beautiful.”

Looking back, Ian and Debra have catered to every area of the market. “We’ve had the eat-in diners, those who want real food, those that want to take away a snack or a hot meal, and those looking for tea, coffee and cake”, says Ian.

He adds, “We took £50 on the first day and I thought, ‘What have we done?’ I used to play backgammon on the picnic tables outside with Debra’s dad, waiting for customers to come.” But the hard work paid off and Lochinver Larder grew to a £600,000 a year business.

While it hasn’t always been an easy ride, Ian and Debra wouldn’t have changed anything. “If I was still travelling for work on the other side of the world, Debra would have said ‘Sean just said his first word’ or ‘Natalie just walked’. I was here for everything they did for the first time. Yes, I haven’t retired on a major pension. But I have a fantastic, close family. We are all mates around the dinner table. And I can hand on my heart say, I have absolutely no regrets.”

As for the future of Lochinver Larder, Ian and Debra have great confidence that it will continue to grow and thrive under its new ownership. “Oh, I hope it does really well”, says Ian. “I really like John. He’s decent to the core and really visionary. I think what he’s doing is really going to help grow this community.”

Ian and Debra are now looking forward to a slightly slower pace of life, where they will have more time to travel - one of their biggest passions. However, for people used to working 16-hour days, “retirement” isn’t a word they’re banding about just yet. “I don’t think we’ll stay in food”, admits Ian. “Ideally it would be nice to find a property with a couple of small letting units on it. But we’ll see.” 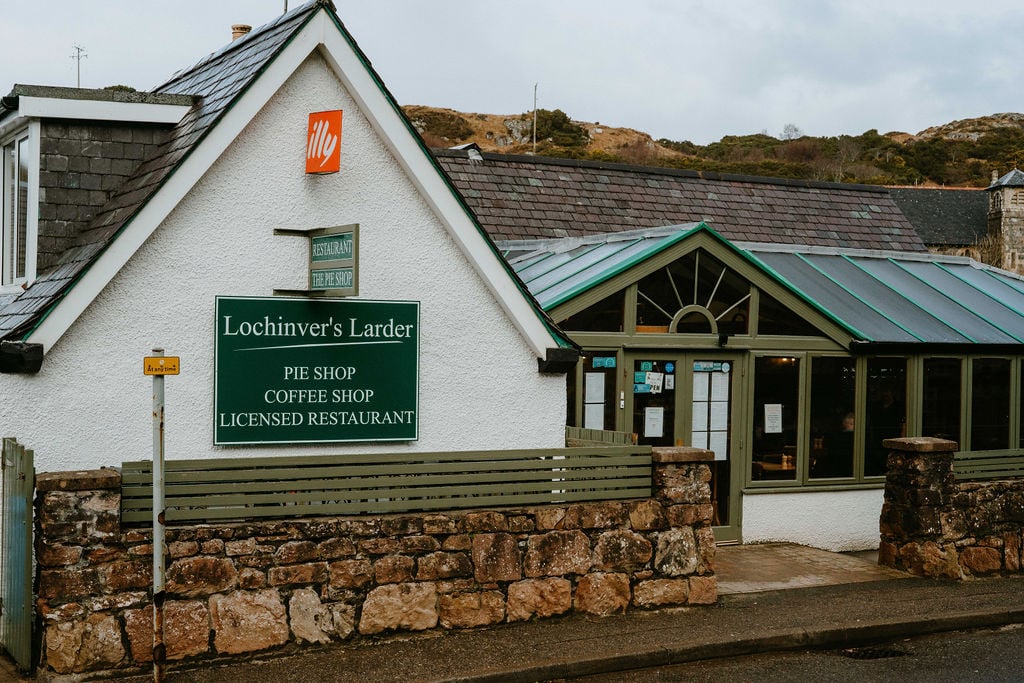 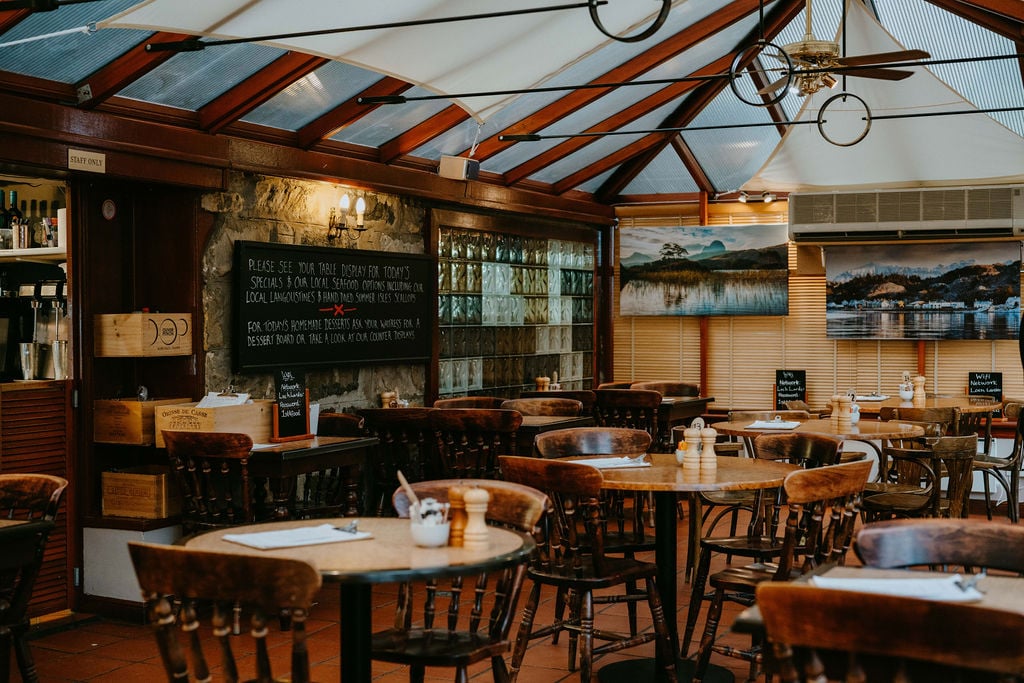 We developed lots of different pies. Some sold really well, some we carried on, and each year we brought out something new. People used to come in on a Saturday and buy half a dozen of one and half a dozen of another.
Ian Stewart